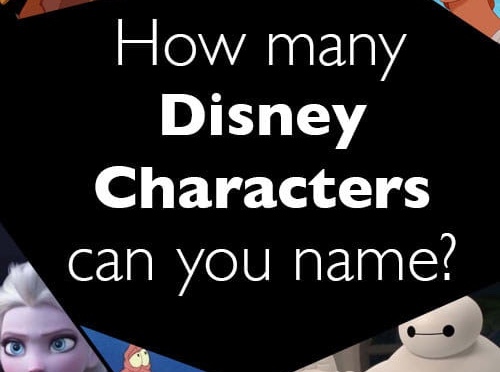 Changing it up a bit. I found this fun Disney quiz. I got 94 out of 811. How many can you get? Leave a comment down below with your score.

So talk to me about video games, are they a blessing or a curse? I’m going to have to say both. Growing up I played them a lot and I really enjoyed it. I started off playing Atari and the original Nintendo, Duck Hunt and original Mario were the best when I was a kid. As I got older there were Segas (seriously am I the only one who remembers being able to rent those from the video store?) and Super Nintendos. Okay okay nostalgia is getting the best of me, I’m sure most of you have been around long enough to have been present for the evolution of gaming. Now it’s 2019 and my kids are absolutely obsessed with the Nintendo Switch. Smash Bros and Mario Odyssey are all the rave at my house right now. My boys could talk to you all day everyday about Mario. When they aren’t playing they’re watching Zack Scott play on YouTube. Don’t worry they don’t actually play games all day although I’m sure they wish they did, so where do we find the balance?

Why are video games a blessing? Okay so I might not go so far as to call them a blessing but they do bring some positivity. Problem solving and pure joy are just two of the positives. Some days when I listen to my boys play there is uncontrollable giggling and excitement. They have defeated a boss or unlocked a character. They take turns helping each other when they get stuck. Thanks to YouTube they will spend hours(not all at once) watching his videos so they can learn how to do new things. It can really be a great bonding experience for them. It’s also wonderful for keeping them occupied when we travel. Our last flight to California was pretty much a breeze for them because they spent the majority of the flight playing Mario Kart. That’s the cool thing about the Switch specifically, it can pretty much go anywhere with you. The console itself has a small screen so no need for a TV to play it. We do bring the cord with us so everyone can play at the hotel during downtime from the parks, it’s great for passing time and nice that we can all play together. Apart from entertainment I have also found they can be incentive. Incentive to get things done and incentive to keep the attitude in check. It’s amazing how quickly they can go from being at each others throats to being the best of friends when the threat of losing the privilege to play is made.

On the flip side of things video games can sure bring out the worst in our kids, really they can bring out the worst in all of us. When you have tried to beat the same boss for the 15th time in a row it can get pretty frustrating. I have heard my oldest say things while playing that I didn’t even know he knew how to say (thanks middle school). I get, I totally do, I can get pretty frustrated too but that’s when I would turn off the game and walk away. Obviously to kids, that;s not the solution they are wanting so some days we walk away with everyone a little pissed off. The other issue we run into when it comes to games, is wanting to play them ALL THE DAMN TIME. So to help with that and because I was tired of being asked everyday when they can play we choose certain days they can play and the others they can’t. Having set days has definitely been helpful, there are random complaints of wishing it was “play day” but for the most part I don’t hear too much about them wanting to play on those days.

Overall I don’t think letting our kids play video games is as big of a deal as some people make it out to be. I mean definitely don’t let it consume their lives to the point that they can’t remember what the sun feels like on their face but don’t feel bad for letting them play either. It brings them joy and maybe brings you a bit of a break to get that extra load of laundry done or maybe you just want an hour to catch up on that show you missed. I’m not ashamed to admit I have totally given out a little extra play time so my mom and I can watch an episode of Chicago PD. If you haven’t seen it, I highly recommend it! What are your thoughts on video games and letting your kids play? Are you for it or against? Why? Leave a comment below and let me know. 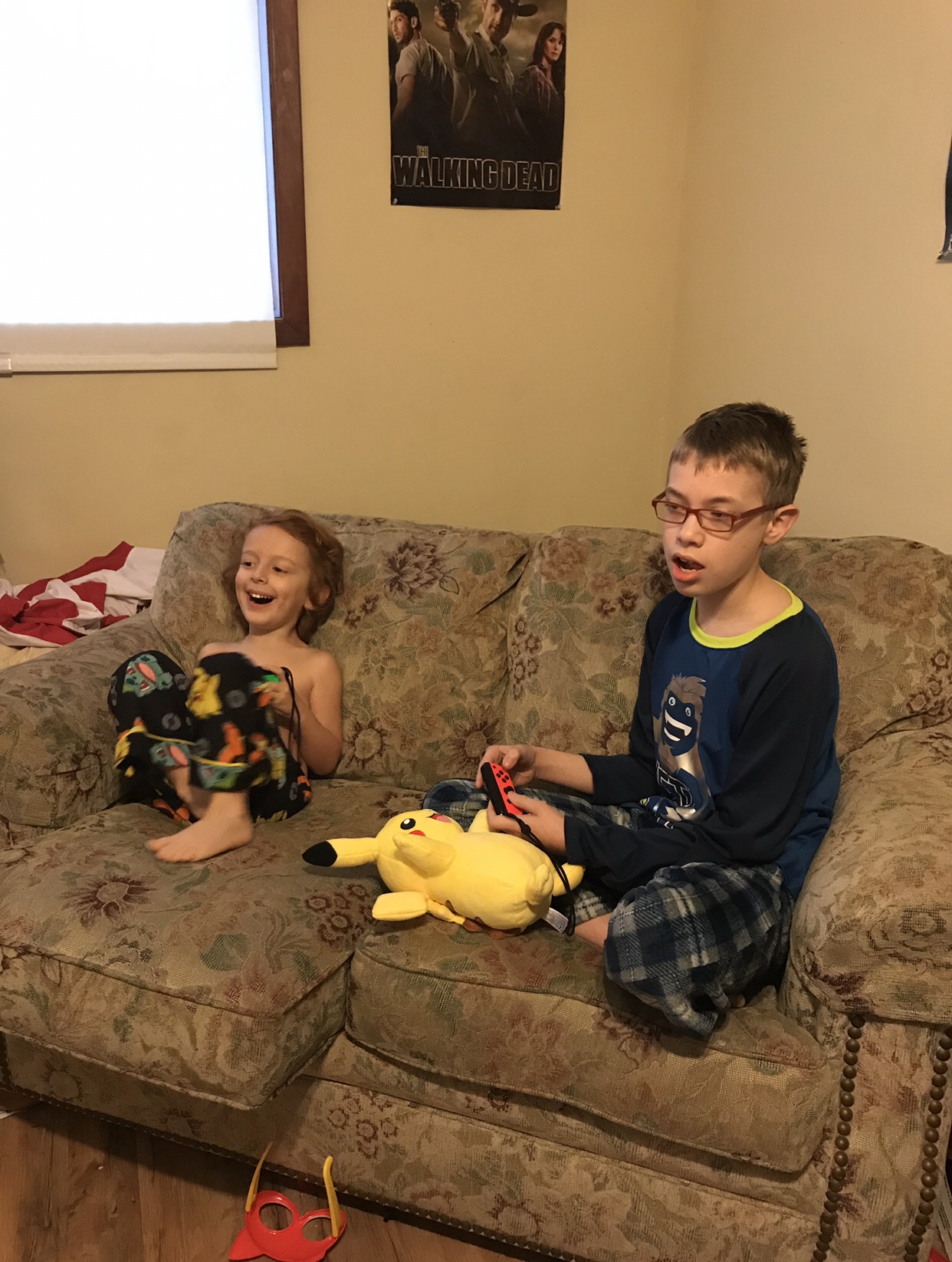 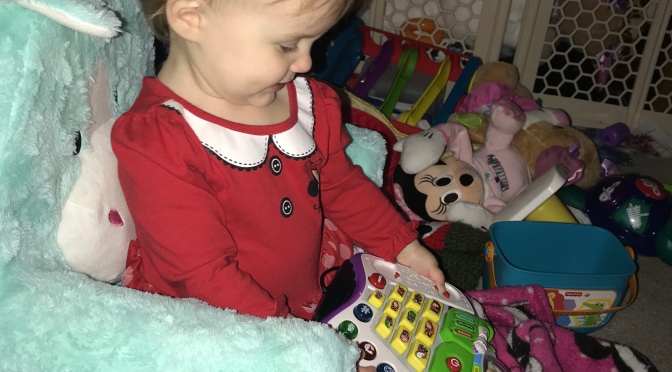 No I’m not talking about the Pixar movie, there’s no Woody and Buzz in this story. Well there is a Buzz phone that some how in the last 9 years has survived without needing the batteries changed, I’m pretty sure the thing is cursed. I guess the more appropriate title for this blog is toy nightmare. Eleven years and three kids later the toys have taken over and I’m not even sure how it happened. It’s like you get rid of one and three more appear.

We’ve lived in our house for almost 5 years now. In that five years the toys have managed to spread from the living room to the kids rooms, the now playroom, and our garage. To be fair the big box of toys in the garage are there because I’ve slowly started putting them out there so they will make their way to Goodwill, I just really suck at taking things to Goodwill. Since turning our office into a playroom the living room isn’t quite as bad, it’s mostly Alices toys since she can’t be in the playroom alone. The real nightmare is the boys rooms. Somehow their closets have become homes to an ungodly amount of toys. I don’t even know how they got there or where the hell the came from. I’m convinced that whoever is taking my socks and Tupperware lids are leaving toys in their place. Just the other night I found myself sneaking happy meal and other unnecessary “toys” into my pockets as I was putting my five year old to bed. My hoodie was full of them by the time I left his room. On the plus side he surprised me that night but cleaning his room without me asking him too. It was during the time he should have been in bed but I was so impressed I let it slide.

So how did we get here? Well when you have one kid on the spectrum who goes through different phases of obsession and collecting stuff you end up with a lot of toys. You should see our ninja turtle and car collection it’s insane. Throw in two more kids with lots of family and friends to shower them with gifts, one gift being a box of years worth of happy meal toys (they are still not forgiven for that one) and suddenly your surrounded. On the bright side as they are getting older they are more into books, video and board games, and family vacations so we have really cut down on toys being gifts. So what do we now that we can put Toy R Us to shame? I’m thinking a yard sale this summer May be in order. Maybe the incentive of getting money for their things will make it easier to give em up. If not mama will just have to get her butt in gear and start making those trips to Goodwill!

Anyone else living in the horror edition of Toy Story? How do you manage to keep from being consumed?

Check out my ears on esty 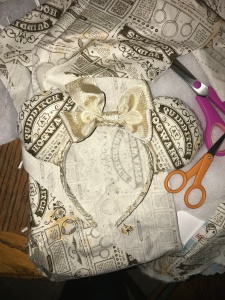